The beautiful and desired champagne diamonds and cognac diamonds of today’s market weren’t always so popular. For years, diamond companies have used marketing campaigns to change the public’s perspective. After years of work, these precious stones are now more sought after than ever. 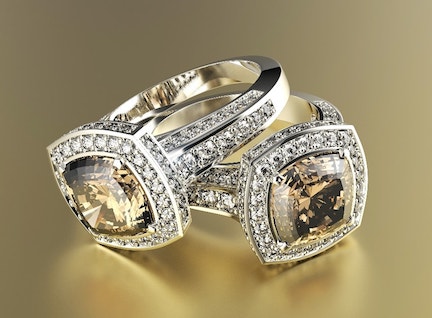 How Did They Get Their Names?

A vast majority of these stones are found at The Argyle Mine in Australia, where nearly 80% of the diamonds mined are brown. With such a large production of brown gems, Rio Tinto’s Argyle Mine took the liberty of pioneering the terms “champagne” and “cognac” diamonds.

The term “champagne diamonds” was designated to the lighter brown shade, which exuded luxury, elegance and wealth just like the bubbly beverage it was named after. The champagne color is basically formed when a light brown diamond has a yellow undertone or modifier (this is caused by nitrogen inclusions within the diamond).

The term “cognac diamonds” was given to the darker shades for its rich appearance. Unlike champagne diamonds, these stones are much darker, exhibiting deeper and richer brown colors. Further, it is quite common to find cognac diamonds with orange undertones or modifiers (also created by nitrogen impurities).

Their Presence In Auctions

Throughout the years, the increasingly popular champagne diamonds and cognac diamonds have made huge sales impacts at global auctions as investors are increasingly searching for uniquely colored precious stones.

This fire rose cushion cut, 545.67 carat gem is one of the most famous champagne diamonds in the world. Having originated from the Cullinan Diamond Mine in South Africa, this stone started out as a brown diamond rough and initially weighed an astounding 755.5 carats. Apart from being one of the largest stones on the planet, it is also known as the world’s largest faceted diamond, and is estimated to be worth between $5-12 million. The stone was ultimately given to the King of Thailand, King Bhumibol Adulyadej, during 1997. To date, the diamond remains in the Royal Thai Palace as part of the crown jewels.

Originating from South Africa, the Golden Pelican is another famous champagne stone weighing in at 69.93 carats.  Set on a 14 karat gold band, the diamond was sold at Christie’s Auction over 40 years ago, and is currently estimated to be worth $3 million.

A Word Of Advice When Purchasing

Naturally fancy colored champagne and cognac diamonds have been around for many years, but it is recently that these stones are rapidly attracting popularity among collectors and investors. Despite this rise in popularity it is very important to know what you are buying.

Both “champagne” and “cognac” are unofficial terms used to describe various shades of brown diamonds, in a simpler (and more attractive) manner for consumers. Therefore, if you are considering purchasing one of these stones make sure they are certified by an established gemological institution such as the GIA. These certifications will give you an in-depth understanding of the stones quality as well as its official color grading.