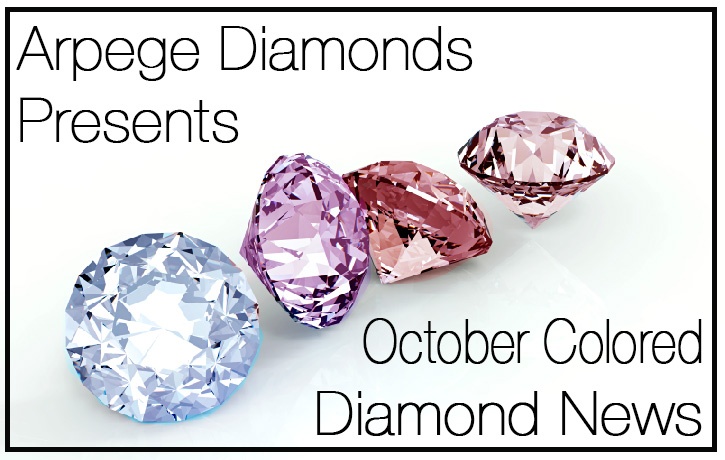 First up is the announcement of the annual Christie’s Magnificent Jewels Auction in November. Blouin Art Info provides information on the upcoming auction to be held in London, including some highlights of the highly anticipated items that will cross the block. Previous years have seen record-breaking colored diamond sales, so the attention of the diamond collecting and investing world will surely be in London on November 9th.

Sotheby’s announced the upcoming sale of what many predict could be a record-setting blue diamond auction. The Sky Blue Diamond is expected to bring in upwards of $25 million when it goes up for auction in Geneva just a week after the aforementioned Christie’s Auction. The 8.01 carat has been classified as fancy vivid blue, the rarest color classification for blue diamonds. The diamond is set in a ring by Cartier and features an emerald cut blue diamond flanked by white diamonds.

The Financial Post discusses the dazzling diamond mine now in operation in Quebec, Canada. The Stornoway Diamond Corp company opened the Renard mine more than two months ahead of schedule. The first diamonds from the mine will go to auction in Antwerp, Belgium on November 14th. The opening of the mine was not without perils, including building an extension to a local highway to access the site and several rounds of financing to pay for the expenses of opening the mine. The Renard mine is anticipated to net $974 million during its lifetime.

The Wall Street Journal reports on De Beers latest diamond harvesting project, in the depth of the oceans. The operation is being conducted 12 miles off the southwestern part of Africa’s Atlantic Coast. The lucrative project is guarded in some secrecy, with the only way to access the site being by a 30 minute helicopter ride. The Journal article features some jaw-dropping photos from the diamond mining, including the specialized equipment needed to perform the mining tasks.

For more diamond news, see the links below: