Fancy Colored Diamonds: Cutting Techniques From Around the World

Throughout the years, cultural identities and traditions contributed to the emergence of unique stylistic preferences and patterns. In turn, these influences yielded distinctions in the way diamonds are polished and cut among different continents. Such characteristics are often subtle, and while they do not affect the stone’s overall value, they help investors, collectors, and enthusiasts (especially those seasoned enough to pick up on these nuances) gain a better understanding of their diamond’s history and cutting origin. 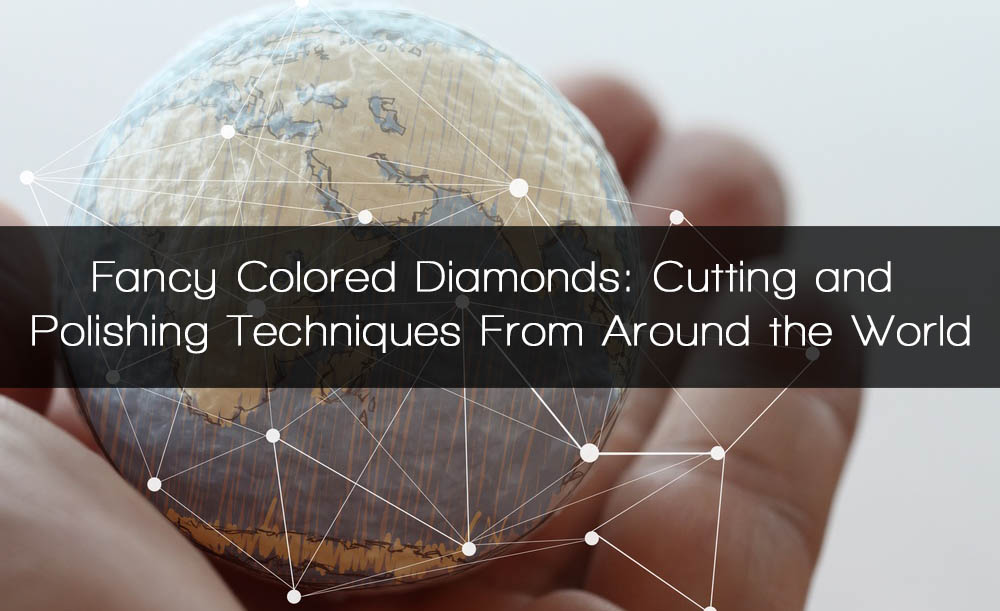 Unlike their colorless counterparts, which are cut and polished to exhibit the greatest amount of brilliance and “sparkle,” colored diamonds are processed in a way which allows them to display the greatest color saturation possible. This allows jewelers greater creative freedom when working with such stones.

Bellow you will find a list of countries that have a unique method of cutting and polishing fancy colored stones. It should be noted that only cushion and radiant cut diamonds were used for the analysis as these offer greater ease for spotting subtleties and nuances between similar shapes.

Although a whole series of articles can be written to tribute the magnificence and plethora of cuts and styles that have originated from Europe, when it comes to cushion and radiant cut diamonds, Belgium holds the greatest significance. More specifically, diamonds cut in Antwerp are known for their low crown, large table, and complete lack of colorless frame. The four walls on the bottom of the stone are made steep and the pavilion facets are comparatively higher than standard, just about reaching the culet. These characteristics are indicative of diamonds that have been cut using sawing processes. Despite this cut sacrificing significant amounts of material and yield a fairly high depth percentage, the symmetry and color dispersion are absolutely stunning. Such stones often lack naturals and extra facets.

The cut of fancy colored diamonds has been highly inspired by styles from other parts of the world, combining influences from both Europe and the United States. Cutters follow the global standard often processing diamonds to be of average depth percentage and color distribution. However, fancy colored diamonds in Israel are unique, not so much for their cut, but for their polish (or lack of). Due to the extreme number of small colored diamond manufacturers locally selling their products, the market has become saturated. As you might have guessed, such circumstances call for high yields as top priority, not attention to detail. This has led to stones often being left with feather inclusions, some chips, and a number of naturals. While such imperfections are subtle, they can still be visible. Such stones however, are only sold within the country and are often re-polished with greater detail when being sold overseas.

In the last four years, a new style has emerged in the city of Surat. These cushion cut diamonds differ from the standard shape illustrating sharp edges, high cut crown, small table, and low pavilion facets. While such stones possess excellent color distribution, their design yields a very high depth percentage. It should be noted that this kind of cut is only applied to diamonds weighing below 3 carats, as larger stones are often polished outside the country.

Often times, fancy colored diamonds cut and polished in New York bear great resemblance to those of Belgium and Israel. Such stones are often indistinguishable unless viewed using a loop. Despite their similarities, New York cut diamonds can be differentiated by the unique shaping of their pavilion facets. Apart from their shaping, the cut and polish of these stones does not cause any comparative detriments or advantages, illustrating average color distribution and depth percentage.

We thought that this category would be worth mentioning as such diamonds are quite common within the global diamond industry. We placed it in this portion of the list because most of these stones originated from New York. This may largely be due to the fact that the concept was also conceived in the Big Apple.

Originally round cut, brilliant diamonds; these gems possess high clarity and very low depth percentages. There are however some issues. As new facets are cut from the initial brilliant cut the diamond’s symmetry grade will rarely exceed “good.” While this leads to the stone having fairly large corners allowing it to appear larger comparatively to other diamonds of similar weight, it creates some colorless patching which hinders color dispersion, and therefore its value as well.

Can you spot the differences between each of the cuts and polishes mentioned in this article? Leave a comment and let us know.