Famous Pink Diamonds: The Star of the South

Arpege Diamonds continues its journey for some of the world’s most famous diamonds in history. Its newest addition to the Famous Diamond Series is a pink diamond with a very powerful story; the Star of the South diamond. 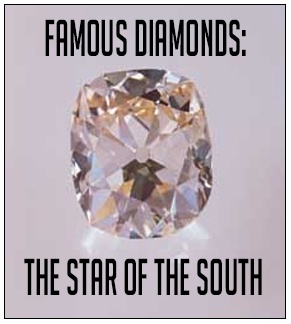 The Star of the South is a 128.48-carat cushion cut fancy light pinkish brown diamond, which has become one of the world’s most famous diamonds for its origin and history.  The stone is graded as a Type lla diamond with VS2 clarity, meaning it is almost free of impurities and has very few, nearly invisible inclusions.

During the early 1850s it was tradition that any slave worker in the Bagagem Diamonds Mines of Brazil who discovered a diamond of significant size would be rewarded. Typically, those slaves were compensated with freedom from slavery along with clothes and tools that would assist them in finding work. The value of the reward was subject to the value of the diamond discovered.

In 1853 Madi Magassa, a slave worker for the diamond mines, discovered a 261.88-carat diamond at the Bagagem River near the city of Estrela do Sul, Brazil. She handed over the stone to her lord, Casimiro de Moraes and was granted freedom and a lifetime income.  The lord, unaware of the true value of this precious stone, sold it to an unknown buyer for a little over $3,000.

The uncut stone was passed between many owners over several years until Costers of Amsterdam, a Dutch factory, purchased it for $35,000. Costers of Amsterdam was an establishment that processed and polished diamonds, such as the legendary Koh-I-Noor among others.

The rough diamond was cut and polished by the Dutch establishment into a captivating cushion shaped stone weighing 128.48 carats, revealing its unique pinkish-brown hue. Once in its final polished form the diamond was purchased by Halphen & Associates of Paris who named the stone The Star of the South due to its origin from the southern country of Brazil.

The stone was showcased various times throughout the years where it quickly caught the attention of many influential people, including Prince Mulhar Raco of West India. The Prince became highly interested in the diamond and bought it for about $400,000 from Halphen & Associates. The Star of the South remained part of the royal jewels for several years until it was later mounted on a $10 million diamond necklace.

After being part of the royal jewels, The Star of the South diamond was owned by several others over the years until Cartier acquired it in 2002 for an undisclosed amount from Rustomjee Jamsetjee of Mumbai. The latest record of the Star of the South was in 2006 when Cartier set the exquisite diamond into a platinum bracelet for the Biennale des Antiquaries in Paris.

The Star of the South continues to be one of the world’s most famous pink diamonds for its powerful story of facilitating the freedom of a slave woman.