There’s nothing that the diamond world loves more than a good mystery or a good curse. The Darya-ye Noor (River or Sea of Light) has a story after the diamond lover’s heart. Like other famous diamonds such as the 186 carat Koh-I Noor, the Hope Diamond, the 410 carat Regent Diamond, and other legendary stones, the Darya-ye Noor comes from one of the most legendary mines in all of history, the Kollur Mine in India’s Andara Pradesh district.
Unfortunately, some of the most amazing stones produced from this mine are considered lost to history. 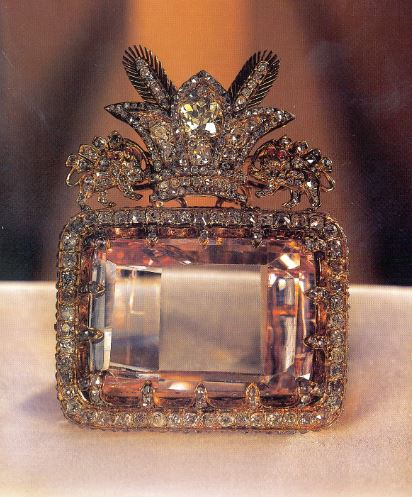 In this article we will be looking at:

The Origin of the Darya-ye Noor

While it is best known as one of the greatest treasures of the Iranian crown jewels, the beautiful pink diamond has an even older origin. In 1642, Jean Baptiste Tavernier laid eyes on what might be the predecessor to the Darya-ye Noor and another star of the crown jewel called Noor ul Ain (Light of the Eye), which he called the Great Table Diamond.
Weighing an estimated 242 carats, it was placed on the throne of Mughal Emperor Shah Jahan, and looted from there to become the possession of the Persian conqueror Nadir Shah, disappearing after his assassination.
It is also thought to be a very old diamond, possibly the property of earlier dynasties that ruled in India. The Kakatiya Dynasty ruled from circa 956 CE to 1323 CE and was said to be in possession of the stone which was subsequently looted from them by the Khilji Dynasty during their comparatively short rule from 1290 CE to 1320 CE.

Here’s Where It Gets Complicated

It’s only when the East India Company comes into the picture that things become muddled. By one account of history, the great pink diamond came into the possession of the East India Company in 1849 and traveled from India to England where it appeared in The Great Exhibition of 1851.
At the discretion of the British government, the stone was offered at auction in 1852, where it was purchased by Khwaja Alimullah, and returned to India, where it was seen in Calcutta by King George V and Queen Mary in 1912.
Following the partition of India, the stone was transferred to Dhaka, the capital of modern Bangladesh, where it is said to be kept in a vault in the Sonali Bank, and has reportedly had its authenticity verified by a team of experts.
However, that is not the story that is told to explain how the gemstone ended up as one of the premier stars of the crown jewels of Iran. It may be that the Great Table Diamond never actually left the possession of Nader Shah’s descendants.
With his many treasures of conquest, he carried the stone back to Iran where his grandson inherited it after his death. It passed through many hands, eventually coming into possession of the Qajar Dynasty, later being inscribed with the name of Fath Ali Shah Qajar, being worn on an armband, and then not appearing until the early part of the 20th century.
The Iranians believe that the stone once adorned the throne or the crown of Cyrus the Great. The central bank of Iran insists that theirs is the true stone, and has never left Iran since coming into Nader Shah’s possession.

The Fantastic Can Also Be True

So which is the true stone? While we don’t know for sure, what we do know is that the Darya-ye Noor weighs 182 carats and the Noor-ul-Ain is estimated to weigh around 60 carats. Experts believe now that both stones were cut from Tavernier’s Great Table Diamond. 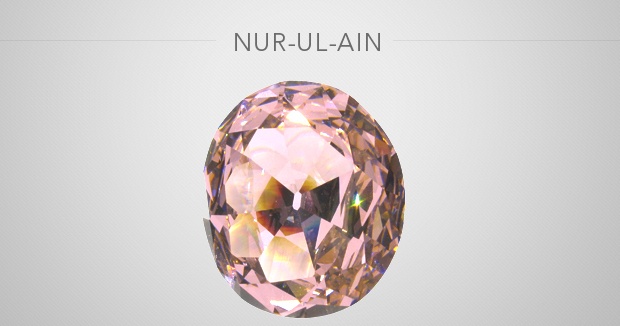 Yet that still leaves another mystery concerning the stone in the Sonali Bank’s vaults. While the stone has not been revealed, it has been examined and verified to be a large pink diamond.
Perhaps there has never been just one Darya-ye Noor. With so many diamonds lost to history, it is entirely possible that the great Kollur Mine was greater than we will ever be able to understand and produced two large pink diamonds of legendary size.