Nowadays museums across the world have a plethora of faceted gems on display, but more often than not, they are a part of the exhibits on mineralogy. Why aren’t these famous colored diamonds being displayed as art? One such stone that truly deserves praise for its beauty is the Golden Empress yellow diamond. It might even leave its mark in history… 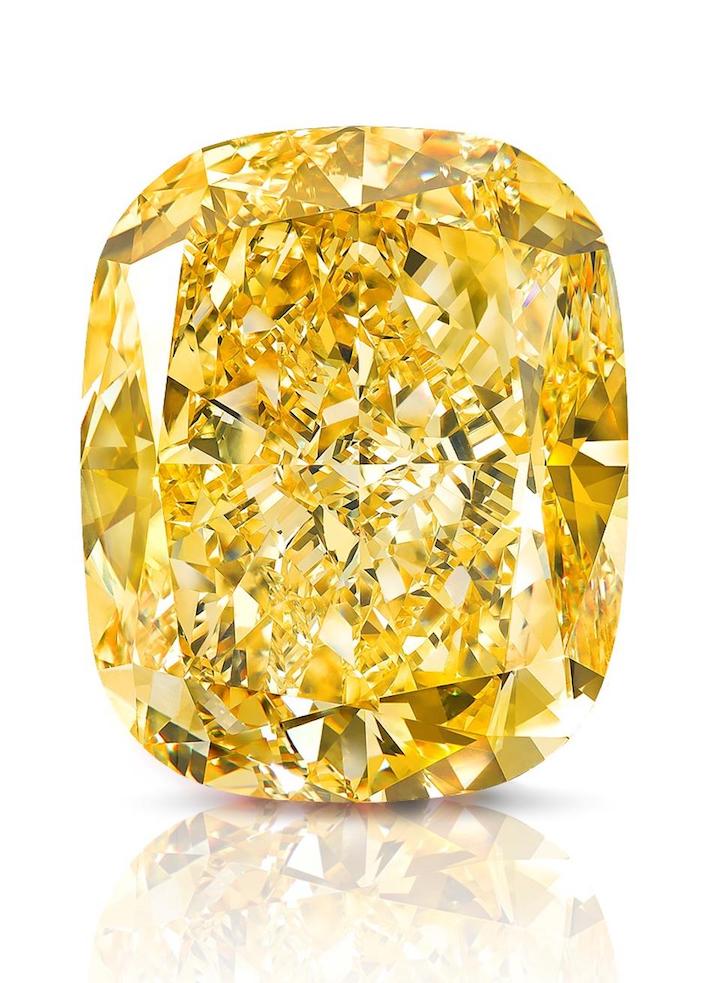 Where Did It Come From?

The diamond originated from the Letšeng diamond mine, once a De Beers operation that is now owned by Gem Diamonds. For those who didn’t know, for the past 60 decades the Letšeng mine has built a reputation for producing numerous remarkable stones, including a high percentage of gems weighing well over 10 carats.

Some of the most notable diamonds originating from this mine are the famous 601-carat Lesotho Brown found in 1960, and a more recently mined 198-carat white diamond found in 2014. The mine has also produced four of the top 20 largest white diamonds on record.

The stone, that would eventually come to be known as the Golden Empress, was assessed by a team of experts well versed in the vagaries and art of cutting large stones. It took months of studying, risk analysis, and imagination to finally conclude on the ideal cut and polish that would reveal the rough’s true beauty. The cushion cut chosen for the principal stone was meant to use the large table to showcase the stone’s depth of color to provide a mesmerizing sight to whoever looks into its depths.

It should be noted that Graff has a history with stunning colored stones, including the 47.39 carat yellow diamond, the Star of Bombay. Graff also is known for making daring repolishings of historic stones such as the Wittlesbach Blue.

The skill set and the tools for cutting a softer, colored diamond, are often different from those used on their colorless counterparts; with the table and the angles for the pavilion and crown facets being precisely calculated to allow maximum light to escape the stone. One false move and the stone could be rendered worthless.

From Rough to Breathtaking

Originally, the Golden Empress diamond was part of a 299 carat rough stone, enough to put it in the record books. However, the exquisite craftsmanship of Graff’s diamond cutters were able to transform the stone into not only one, but nine high quality pieces of art.

Setting the bar, the first and most breathtaking piece was the Golden Empress itself. Weighing in at a still massive 132.55 carats, the cushion cut diamond was given a Fancy Intense Yellow color grading. Additionally, six pear cut and two brilliant cut stones were also carved from the huge rough, the largest of them a marquise cut weighing in at 21.34 carats.

Today, the Golden Empress sits tightly embedded in a necklace of 31 other Fancy Intense yellow diamonds, because when it comes to diamonds of this quality, there is no such idea as too much of a good thing.