Colored diamonds are a beautiful rarity that have been catching the eye of investors and collectors alike in recent years. Blue diamonds have been making headlines worldwide with the sales of diamonds like The Blue Moonand The Wittelbach Graff. Quite recently, the De Beers Millennium Jewel 4 sold for $32 million at an auction in Hong Kong held by Sotheby’s – a record price for a jewel sold in Asia. 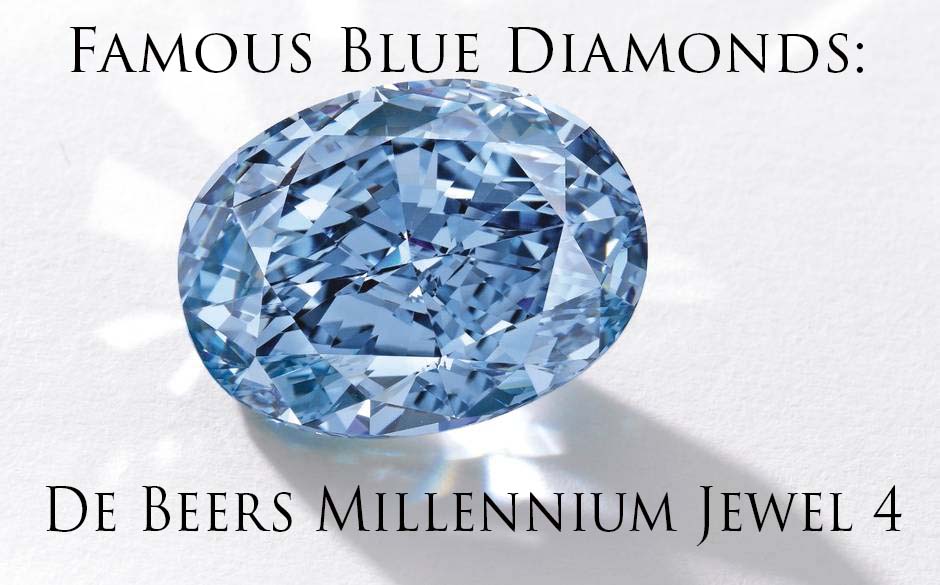 The De Beers Millennium Jewel 4 is an oval shaped Fancy Vivid blue 10.10-carat diamond that has been labeled as internally flawless by the GIA. It was unveiled by De Beers to commemorate the millennium in the year 2000 and was displayed at the Millennium Dome in London.

As part of a bigger collection (10 other blue diamonds and a 203.04-carat colorless diamond), the De Beers Millennium Jewel 4 was part of a multi-million dollar planned jewel heist in November 2000 that was thwarted by the police. The plan for the group of thieves was to raid the exhibition, escape in a speedboat down the Thames River, and get away with an estimated $531 million (£350 million). The attempted raid was halted after the police were tipped off and the thieves were arrested.

The Millennium Blue Diamonds are a group of stones that vary in size and cut. However, they all originated from the Cullinan mine in South Africa. The stones have all been sold with the exception of the Millennium Star, a 203.04-carat diamond still owned by De Beers. Before the auction of the Millennium Jewel 4, the only other diamond sold in the open market was a 5.16-carat pear shaped blue diamond, which sold for $6.4 million in April of 2010.

The Millennium Jewel 4 is one of the most expensive diamonds in the world, worth an estimated $30–35 million. However, it didn’t surpass the Blue Moon of Josephine. The Blue Moon of Josephine is a 12.03-carat diamond that was sold for $48.4 million to a Hong Kong billionaire in November of 2015 at Sotheby’s Geneva, making it the most expensive diamond sold at an auction – ever.

Executive Vice President and Chief Research & Laboratory Officer at the GIA Tom Moses says, “Blue diamonds of any intensity of color are amongst the rarest of all gems. Highly saturated blue diamonds over 10 carats combined with an internally flawless clarity grade are extremely rare.”