More precious than diamonds is the bravery of a young boy facing a potentially fatal illness. In 2012, that’s exactly what seven year-old Liam Latz of Sydney was facing. He was diagnosed with anaplastic large cell lymphoma and faced with intensive treatment to push the disease into remission. 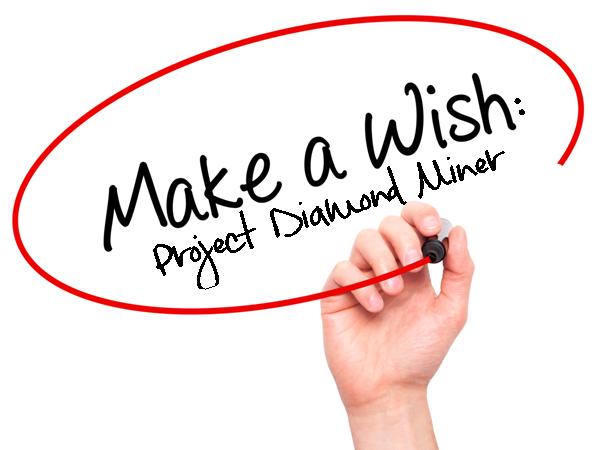 It would be hard for an adult, but for a little boy and his family it was 936 hours of chemotherapy, with dozens of drugs, and no real guarantee that it would work. Liam, a fan and player of the videogame and virtual world called Minecraft, would receive a little Minecraft toy after each treatment to help him through the grueling regimen.

His parents, Gavin and Marnie, approached the Make-a-Wish foundation to do something special for their son. Make-a-Wish is a nonprofit foundation that helps fulfill the wishes of children facing life-threatening diseases and medical conditions, and helps them to experience joy and happiness through one of the most difficult experiences of their lives. Liam wanted to visit a real life mine. Make-a-Wish reached out to Rio Tinto, owner of the Argyle diamond mine, and Rio Tinto reached back. As one of the largest mining operations in the world, they may not get many little children who want to come to visit, but they moved very quickly to start fulfilling that wish.

After months of treatment, it was time for Liam to have some fun. Liam and his family flew on a commuter flight to Western Australia, and spent the night in a mining camp donga – a portable building like a mobile home – and had breakfast at 6:00AM with the miners. After a safety lecture, Liam and his brothers became the first children to ever visit the underground area of the mine. This is no small undertaking, as conditions underground and aboveground at any mine have the potential for danger, but Rio Tinto did its best to make things as safe as could be for the boys. They became miners for a day, and were able to ride on the giant trucks, operate one of the drills, and sort through some of the raw rock for diamonds. The 70 miners greeted the boys and gave them two diamonds, one purchased with funds from the staff social club.

Liam’s lymphoma went into remission and remains that way. Now ten years old, Liam collects rocks and is interested in becoming an archaeologist. The Latz family has come out the other side, and remember their adventure as something that helped them get through – calling it their “miner miracle.” Sometimes, in the darkest parts of life, the moments of light and caring light the way. Being able to make a wish come true is wonderful thing, not only for the one making the wish, but also for the ones who help make it come true. We hope Liam will have many more wishes come true in his life, and that he will count many more years.

To read other articles in the Arpège Diamonds Presents “Inside the Diamond Mines Series” click on the links below: