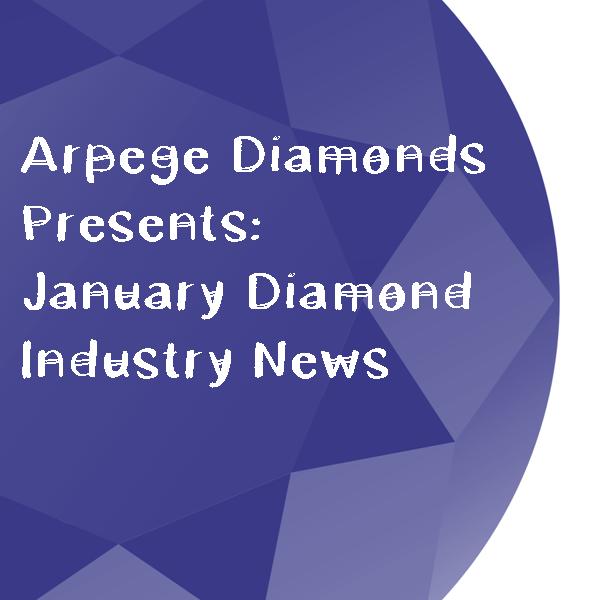 1. Fancy Colored Diamonds to Sparkle in 2016

Barron’s Abby Schultz discusses some of the record-making sales of 2015 and industry forecasts for 2016. Notable sales in 2015 include a Hong Kong billionaire who shelled out $77 million for a pair of fancy colored diamonds at an auction in Geneva. On the horizon for 2016 are predictions of a continuing increase in the value of the fancy colored diamond market, including pink diamonds which have shown a 315% growth over the past ten years.

Diamond industry news giant Rapaport reported on the first diamond-backed cryptocurrency, PinkCoin. Similar to BitCoin, PinkCoin is backed by a colored-diamond trust kept by BitGem Asset Management (BAM). The initial asset pool has been valued at $5 million. PinkCoins can be redeemed for Bitcoins, a brainchild of The Winkelvoss Twins of Facebook fame.

Berkshire Hathaway’s Business Wire summarizes a recent report from Research & Market on the status of and predictions for the diamond mining world through 2019. The report highlights the increasing demand for diamonds emerging from India and China. Also discussed are the impacts of the environmental issues surrounding diamond mining.

Rapaport reports on the stunning sales figures that Sotheby Auction’s jewelry sector reached in 2015. A jaw-dropping $571 million of sought after jewelry hit the auction block last year. The lionshare of the sales, $300.5 million, came from two auctions in Geneva offering Magnificent Jewels & Noble Jewels. Other notable auction totals were made in New York and Hong Kong, confirming the growing demand for high-end jewelry and diamonds in Asian markets.

One of the biggest producers of pink diamonds, Rio Tinto, posted a significant increase in output during the fourth quarter of 2015.  Rapaport reports that Rio Tinto boasted a 50% increase from the Argyle mine during the last quarter of 2015, with a 25% growth over the year. Production is expected to continue to grow in 2016, with an anticipated 21% increase in output for the coming year.

The Huffington Post’s Leigh Campbell summarized the growing interest in rare pink diamonds coming out of Australia. Highlighting notable sales like the Graff Pink which Arpege Diamonds wrote on in 2015. Adding to the growing interest in pink diamonds, Campbell notes celebrities who have taken to sporting these beautiful pink diamonds in 2015. Among the list of celbrities are Mariah Carey, Blake Lively, and Her Majesty Queen Elizabeth II who has a 23 carat stunner in her collection.