A Look Back At The Argyle Pink Diamonds Tender

The Rio Tinto Argyle Pink Diamond Tender is one of the most exclusive events in the diamond world. The annual tender began more than 30 years ago and has auctioned off hundreds of diamonds throughout the years. Each year, the tender invites a select number of lucky attendees who have the means and the interest to invest in these precious gems. Many of the attendees are diamond dealers, while a select few are high-net worth investors. The Tender has previews throughout the world, generally for about a month before bidding closes. 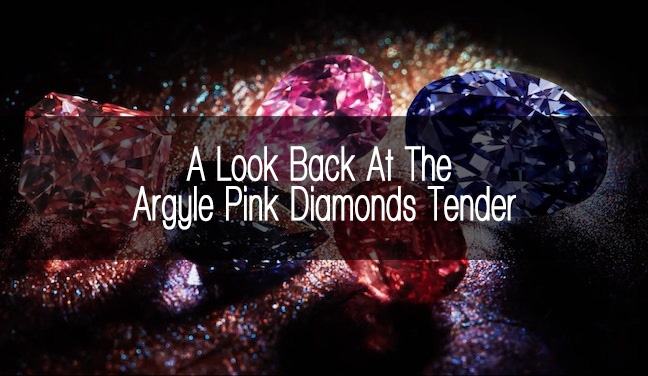 Let’s take a look back at some of the most famous diamonds that have been offered over the years at the tender.

Where It All Began

The first Argyle Tender was held in Antwerp, Belgium during 1984. As the Tender started growing in popularity, it became common for previews to be held throughout the world, including cultural and financial hot spots such as Hong Kong, London, New York, Geneva, Tokyo, and Perth. Each tender showcases a unique number of diamonds, ranging from 35 to 70 colored stones. The majority of the diamonds showcased are pink, red, or purple and always include a select handful of “featured” stones.

The 2014 Rio Tinto Pink Tender featured 54 red and pink diamonds. However, 3 diamonds stood out in particular and were selected to be showcased during the tender:

Totaling over 44.14 carats, the 2015 Tender was debuted at the Sydney Opera House and featured 65 magnificent diamonds. Five “hero diamonds” were selected from the group, including three reds, a pink, and a purplish pink stone. The diamonds featured included:

Unfortunately, none of the sales prices were ever disclosed, however it is known that The Argyle Prima fetched the highest price and was bought by the Sciens Coloured Diamond Fund II BV.

2016’s Tender was the only Tender in Argyle’s history that featured gems exclusively from the mine’s underground expansion. Named “The Chroma Collection” last year’s Tender featured 63 breathtaking colored stones of which 57 were pink, 4 were red, and 2 were violet. The 2016 Tender showcased five special diamonds, including

Once again not much information was disclosed regarding the prices of these precious gems, however due to its immense rarity, unique color, and breathtaking appearance, it is speculated that the Argyle Violet fetched record breaking prices. More specifically, the stone is thought to be worth between $2.8 and $5.6 million (or $1-$2 million per carat).

Rio Tinto claimed that the average price paid for Tender stones has tripled during the past decade. More specifically 2016’s Tender achieved the highest average biding prices in 32 years, with prices exceeding those of 2015’s by 25-30%. Let’s take into account that this tender is also, noticeably better than any previous Tender. It is worth noting that this year’s Tender is the first tender containing only underground material.

It is without a doubt that Argyle’s Tenders have managed to amaze us year after year however what are we to expect for 2017? Incremental increases in demand for these precious stones coupled with the mine’s depleting resources and imminent closure, will we see another record breaking auction as the Mine reaches its last “hurrah” or will nothing ever be able to measure up to the magnificence of last year’s Chroma Collection?